It really wasn't easy to get a Rust development setup on my NixOS.

So here's just a litte insight into my NixOS Rust setup and my first study inspired Rust project - a Rust based Simple Stack Machine.

The official Rust on NixOS documentation wasn't directly helpful for getting started without Rust experience. It provides some very complex setup options.

I think rustup as a package in home-manager would work just as well.

We had just discussed how deterministic stack machines work in the "Automata Theory" module when I was looking for a project to learn how to use Rust.

Implementing the deterministic stack machine with syntactical analysis was not too hard. I started using a struct as custom stack consisting of a list: [char; 100] and an index value to store the last relevant character position (theoretical current stack height) of the list.

Since I had written blanks at every position to initialize the list list: [' '; 100], it made sense to keep an extra index for this at that moment.

I later found out that Vec<char> is the data type I was looking for.

At start the DetSMConfig struct is filled with an empty initial stack and the input word.

To decide whether a forward step by the stack machine was successful or not I created the DetSMStepState struct.

Since I had actually planned more time for the development and was finished much faster than expected, I then also wanted to implement a non-deterministic stack machine :)

Since the non-deterministic stack machine was only briefly mentioned at the university, I had to come up with my own concept for its development.

A non-deterministic stack machine is a bit more complex than a deterministic one because, unlike the deterministic one, there is a logical decision tree. With the assumption of a lookahead=1, it can happen during the syntactical analysis that it is only later clear which would have been the correct stack symbol for a previously processed character.

Therefore, the basic idea is to track every step / every decision in order to be able to reverse a decision made at some point before if necessary.

To accomplish this, I introduced a config_path variable into the stack machine, containing a vector of NonDetSMConfig.

I decided to replace my list based stack implementation with Vec<char> as stack to get rid of the stack limit, which was based on a fixed array size.

If once stack and remainder_word are both empty at the same time, the syntactical analysis was successful. 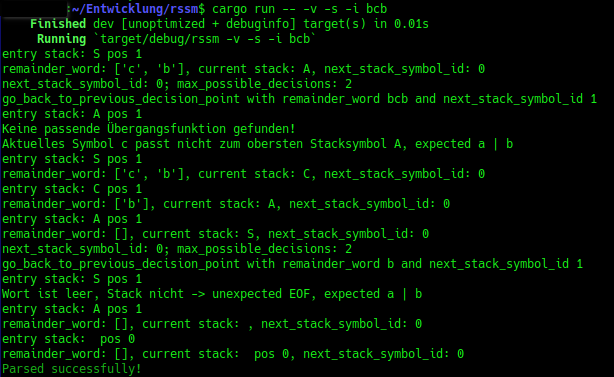 ... without any Rust development in the meantime my IDE was not happy on startup:

On the console I got errors as well:

After checking the rust-toolchain and that everything was up-to-date the solution was too easy. rm -rf ~/.rustup

Running cargo build after deleting that folder works without any problems. Thanks to the rustup-wrapper, required project dependencies were also automatically reinstalled.

Take a look at the current project repository if you are still interested after reading that article :)